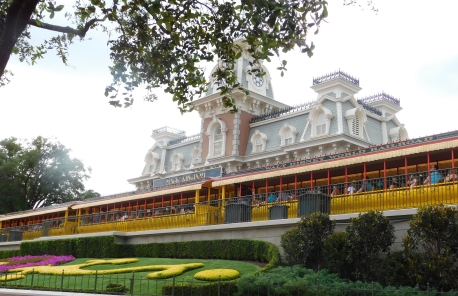 Even at thirty-three years old the Magic Kingdom is probably my favorite Disney Park.  I think it is the atmosphere of the park.  There is nothing like walking through the front gate seeing the train station and then emerging from the tunnel and seeing the beginning of Main Street USA and then rounding the corner from the circle a 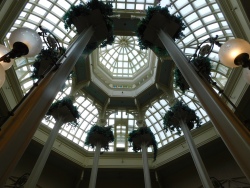 nd seeing Cinderella’s castle welcoming you.  And this trip to the Magic Kingdom found me finding one of my two new favorite restaurants, The Crystal Palace.  We had breakfast and the Crystal Palace

and I really enjoyed it.  Not only did I like the food at the Crystal Palace I thought it was very pretty in there too.  That will be a must do on my next Disney Vacation, with or without kids, even though it is character dinning.  Of course our day at the Magic Kingdom (that day) turned pretty soggy quickly after breakfast.  No sooner we got on

the train at the Main Street Station to make a loop around the park, a thunderstorm rolled in and we had to exit the train at the first stop.  So we decided to make it a short day at the Magic Kingdom, but would return later for dinner.  One thing that was really cool to see was as we were working our way to the exit there was a rainy day parade.  Dinner that night was at Tony’s Town Square, which used to be one of my favorites at the Magic Kingdom but it really didn’t do much for me this time.  I love the Lady and the Tramp theme but the food was just okay this time.  After dinner it was almost time to catch Wishes for one last time.  I am really going to miss that s 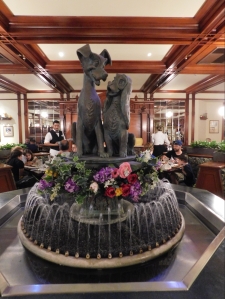 how but I can’t wait to see the new one.  It is just so cool watching fireworks with a castle in front of it.  (We ended up watching the fireworks from the back of the Castle this night.) 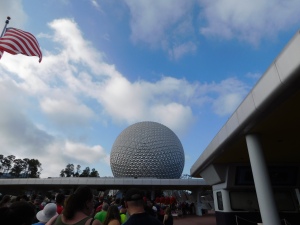 EPCOT is probably my least favorite park but I do love the Flower and Garden Show.  That is one of the reasons we went when we did.  EPCOT to me is the hottest park of them all, very little shade, ecpecially in the World Showcase.  And there really is not many rides.  Illuminations is nice and if you can get lucky enough to get a late reservation and an outside seat at Rose and Crown they have some of the best viewing for Illuminations.  This trip I was very excited for EPCOT because I had a princess breakfast reserved in Normway.  I know I am 33 years old but I have never dined with princesses during any of my past visits to Disney World.  The princess breakfast was okay and I really don’t have to go again, unless of course we have the two girls with us.  Any my Rose and Crown reservation was late enough and we were out side so we were able to see Illuminations great.  I did not ride the new Frozen ride while we were there so that just gives me a reason to go back, right? 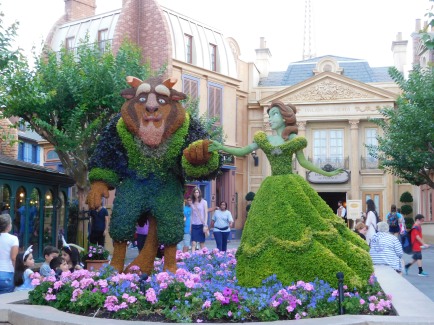 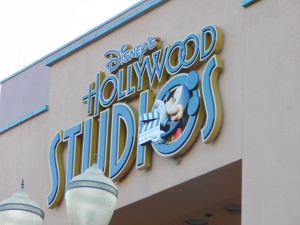 I want to love Hollywood Studios but there is not really enough to do there to make me love it.  I really enjoy Toy Story Midway Mania, Beauty and the Beast, and Fantasmic and the Great Movie Ride and the Muppets 3D are okay.  But outside of these few things I am searching for things to kill time.  I hope once Toy Story Land and Star Wars Land have been completed there will be more to keep busy until Fantasmic starts.  And the bad thing this time was I didn’t even get to see Beauty and the Beast, the last show was at 5:00, which was while we were eating and Fantasmic didn’t start till 9:00 that was still four hours I would have loved to watch the Beauty and the Beast show somewhere in those four hours.  While at Hollywood Studios we ate at Hollywood and Vine which is okay but not one of my favorites.  I will say if you have young kids Hollywood and Vine does have nice character dinning.  For me the fact that Hollywood Studios doesn’t have a whole lot to keep you busy was one of the reasons I started with it, since I knew we would not get a full day in since it was check in day.

This year we ended up staying at two different Disney Resorts.  4 nights at Port Orleans Riverside and 1 Night at Coronado Springs.   Riverside is the only place I have stayed at on property and I love it.  So it was fun to try someplace new, even if it was for one night.  Coronado is very beautiful and reminds me a lot of Port Orleans.  There is a lot more walking at Coronado than at Port Orleans.  The walk up to the lobby/restaurant area was like walking from the front of EPCOT all the way to the back of the World Showcase, if not longer.  It was a least a very beautiful relaxing walk but to walk that way in the heat just for a drink would it really be worth it?  You would probably be in need of another drink by the time you walked back to your room.  Port Orleans has walking too don’t get me wrong but it seems like they have a few different paths that lead to the same place and so it doesn’t seem to take as long.  At Port Orleans we ended up with one of the Royal Rooms which by the way was Amazing!  Even at 30 I was super excited to stay in one of the “Princess Rooms”!  The head-board with the fire works was one of the cutest things I have ever saw.  In the end I still like Port Orleans Riverside better than Coronado Springs.  Then again maybe I am just like it better because it has Magnolia Bend which looks like Southern Plantation Homes.

The Room at Port Orleans

The Room at Coronado Springs 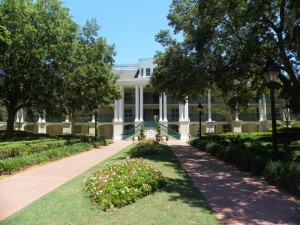